Vida is excited to announce it’s partnership with a well-respected Doctor of Chiropractic in the Bellevue community, Dr. Monti Sorem.

With his career transition, having matured fully in the last year, he found it was time to pursue another passion of his; off-road motorcycle racing.

Monti has been racing since the age of 6 but had to take the last few years off in order to focus on his vision of becoming a firefighter/paramedic.  In his last full racing season of 2011,  he was honored to win a state title in the 30-Pro class in the Enduro Series and 3rd place in the 200-Pro class in the competitive off-road series.  Even though he has not been racing for the past few years, he remained involved in the promotion of racing and consulting with several riders at the professional and amateur ranks.

In 2010-2013, Monti was humbled and honored to be asked to be the team physician for the USA National Team and accompanied them to Mexico, Finland, Germany and Italy for the World Championships.  Through his service he became nationally and locally recognized for his knowledge and expertise in sports injury and treatment.

On several occasions, he has been the subject of articles for Cycle News and Dirtrider magazine publications.   Even though he is removed from his private practice, he still consults with many riders because of his involvement in Team USA and his reputation as a trainer/provider.

Watch for updates on “Dr. Dirtrider” over the next few months as he takes on the race circuit!

I graduated Cum Laude from Palmer College of Chiropractic in 2005.  I treated all variety of patients’ but enjoyed treating young athletes with a focus on ART and advanced rehab techniques.  I started a multi disciplinary practice in Lacey WA in 2005.  During that time I served my community as an assistant baseball coach and football strength and conditioning coach at Olympia High School from 2005-09.  I also was active in the Lacey Sunrise Lions Club serving as the charter representative to Boy Scout Troop 222 for several years.  During that time I was active in the Thurston County Chamber and Lacey Chamber.  I won an award for outstanding new business in 2006 from the Thurston County Economic Development Council.  In 2009, I started serving my community as a volunteer FF/EMT for East Olympia District 6 and was Outstanding EMT for 2010.

In 2010 I was asked to be part of the medical team that traveled with Team USA off-road motorcycle team to the world championships in Mexico.  The team was made up of professional racers from Monster Energy Kawasaki, Red Bull KTM, JCR Honda and others.  My medical partner was an ER physician from Pennsylvania and our two skill sets served the team very well.  I also traveled with the team to Finland in 2011, Germany 2012 and Italy 2013.  The world championships are an annual 6 day competition called the International Six Day Enduro (ISDE) and is referred to world at the “olympics of dirt biking.”  In other countries, it is impossible to describe how big the event is…. impressive.

After the ISDE, I continued to consult with several professional riders and even 3 X-Games gold and bronze medalists in Endurocross.

In 2011, I enrolled in Paramedic school and attended Paramedic school until 2012 while running a practice full time.  In 2012, I sold my practice to my associate and ventured to Bellevue to work at Elite Sports and Spine.  I felt like at the time a change in my career was needed and the population base in the Seattle/Bellevue area would offer more sports opportunities. My favorite time about ESS was spending time with great people like Dr. Sherman and Travis Owens ATC.

In 2015, I had an offer for a position as a career Firefighter/Paramedic in my hometown of Tumwater Washington and I couldn’t refuse.  I retired from full time practice to be the best FF/PM possible.  It was a great choice for me and I love coming to work everyday.  I continue to consult with several professional and local motorcycle racers and have taken a role as a Peer Fitness Trainer in my department where I develop exercise programs for my brothers and sisters in the Fire Service.

I am married to my wonderful wife Brandi.   She works for the Olympia School district where she can also work to better our community.  Together, we have two daughters Kenadee 7 and Penelope 1 year old.  Kenadee loves school and riding her bike.  Penelope is fun loving, smiling but always a tornado wherever she goes.  I wouldn’t have it any other way. 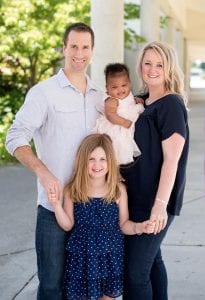